Setting the Record Straight: More than 52,000 Europeans Died from Heat in Summer 2003

Following a string of high heat days and meteorologists' warnings that this summer could be another scorcher, European public health officials and politicians are revisiting the devastating heat wave of 2003. The severely hot weather that withered crops, dried up rivers, and fueled fires that summer took a massive human toll. The full magnitude of this quiet catastrophe still remains largely an untold story, as data revealing the continent-wide scale have only slowly become available in the years since. All in all, more than 52,000 Europeans died from heat in the summer of 2003, making the heat wave one of the deadliest climate-related disasters in Western history. Temperature records were broken in a number of countries in 2003 as Europe experienced its hottest weather in at least 500 years. The unusually warm weather began in June and culminated in an unrelenting heat wave during the first two weeks of August. With both daytime and nighttime temperatures remaining high, large numbers of vulnerable people, particularly the elderly, succumbed to the baking heat. Hospitals were faced with unusually large burdens, and undertakers and funeral homes were overwhelmed. In France, doctors' warnings of a heat epidemic were largely quashed with the Ministry of Health's refusal to acknowledge the massive problem, reminiscent of the early political denial of the 1995 Chicago heat wave that killed more than 700 people in a matter of days. But as the bodies piled up, requiring makeshift morgues, "ignore and neglect" was no longer a viable option. 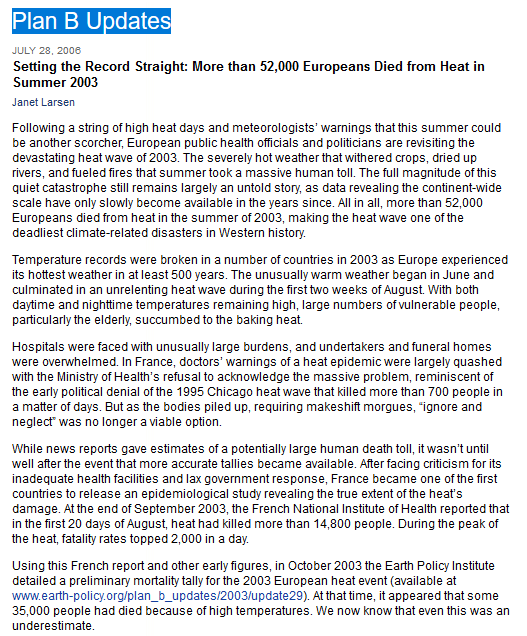