The first-ever report tracking rectal microbicide research and development expenditures, was released on April 24 by the International Rectal Microbicide Working Group (IRMWG) at a special symposium titled "Rectal Microbicides - A New Frontier in HIV Prevention" at the Microbicides 2006 conference in Cape Town, South Africa. "This important document describes the current landscape of rectal microbicide research and helps define what resources will be needed to develop a safe and effective rectal microbicide," said one of the field's chief researchers and a key organizer of the symposium, Dr. Ian McGowan of the Center for Prevention Research at the UCLA AIDS Institute, David Geffen School of Medicine. Similar to a vaginal microbicide, a rectal microbicide may be formulated as a gel, cream or lubricant and would provide protection against HIV and other STDs in the absence of a condom during anal intercourse. Studies show that up to 30% of the heterosexual population in many cultures engages in anal intercourse, making the development of a safe, effective rectal microbicide a desperately needed new prevention option for women, males who have sex with males, and gay men around the world. "At any given moment, more heterosexual women than gay men are engaging in anal intercourse," said Anna Forbes, Global North Programs Coordinator for the Global Campaign for Microbicides. "A receptive sex partner is a receptive sex partner. We need rectal microbicides, just as we need vaginal microbicides, to help receptive sex partners save their own lives." According to the report, funding for rectal microbicide research totaled US$34 million between 2000 and 2006, an increase from US$2 million in 2000. The U.S. public sector, including the Centers for Disease Control and Prevention (CDC) and the National Institutes of Health (NIH),contributed 97.4% of these funds. Philanthropic funding totaled US$739,649 between 2000 and 2006, accounting for approximately 2.2% of total investments for rectal microbicide research. The commercial sector has yet to contribute actual dollars and instead has supported the work through in-kind donations including time spent, pipeline compounds, and infrastructure. Microbicide funding from the European Union designated specifically to the research and development of a rectal product proved too elusive to track. However, in 2004, Europe contributed 23% of the global resources for microbicides. The report recommends a series of urgent actions to discover a rectal microbicide within a time frame proportionate to the urgency of its need, beginning with a call for a signifcant increase of funding. According to the IRMWG, "donors from all sectors must provide a minimum of US$350 million over 10-15 years, for an average of US$35 million per year, to build a comprehensive rectal microbicide research program." Recommendations for researchers include recruiting new scientists to the field and promoting rectal microbicide research within the scientific community. Advocates must "promote global, national and regional surveillance efforts to determine the percentage of HIV infection attributed to anal intercourse in order to better assess the need for rectal microbicide development," says the report. 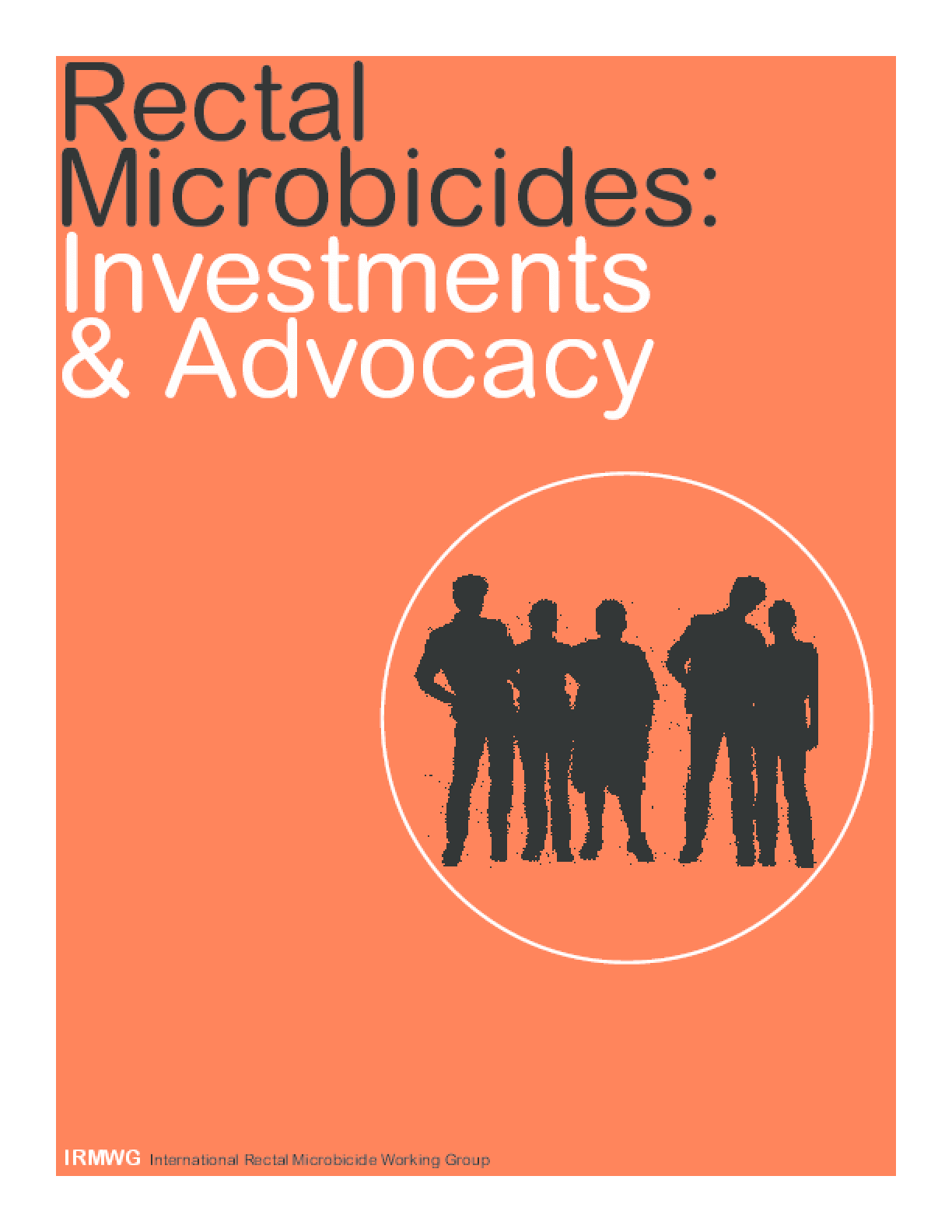