In Hurricane Sandy's wake, entire communities were left underwater, without heat or electricity, and residents were displaced from their homes. Throughout the five boroughs and across the nation, clothing and food drives were organized, donations started pouring in to relief organizations, and the city's disaster response mechanisms sprang into action. New York City's network of emergency food organizations -- the hundreds of food pantries and soup kitchens across the five boroughs -- quickly became a key component of this disaster response, putting their critical assets to work: facilities at which to prepare hot meals; a dedicated staff and volunteer base to handle incoming shipments of food, water and supplies; and mobile food pantries to venture into hard-hit communities and fill gaps in service. This network was in place prior to the storm, to meet the needs of an estimated 1.4 million New Yorkers who find themselves with no place else to turn for a meal, except a food pantry or soup kitchen in our network. The Great Recession thrust hundreds of thousands of New Yorkers into financial instability, raising poverty levels, sending unemployment rates skyrocketing, and forcing many to seek food assistance for the first time. Understanding that such financial upheaval would result in a swell of need, support from public and private sources increased as well. But these resources were soon exhausted, and as the economy transitioned from recession to a slow and stagnant recovery, support from public and private sources diminished. As a result of these opposing pressures, the strain on New York City food pantries and soup kitchens has grown. Nearly all food pantries and soup kitchens in Food Bank For New York City's emergency food network have had to contend with losses in key sources of emergency food and non-food resources in recent years, despite the fact that food poverty has increased. Yet, these agencies were an immediate and key component of the disaster response when Hurricane Sandy hit. They utilized all their assets, no matter how few, to provide food to New Yorkers in crisis. This report examines the state of food pantries and soup kitchens in the Food Bank's network now, nearly five years after the start of the Great Recession and more than three years after the start of the recovery. Survey results from the food pantries and soup kitchens in Food Bank For New York City paint a picture of a squeezed and shrunken safety net -- one that must be addressed to ensure that these crucial emergency food organizations can continue to provide much-needed food and services to the more than one million vulnerable New Yorkers who rely on them every day. 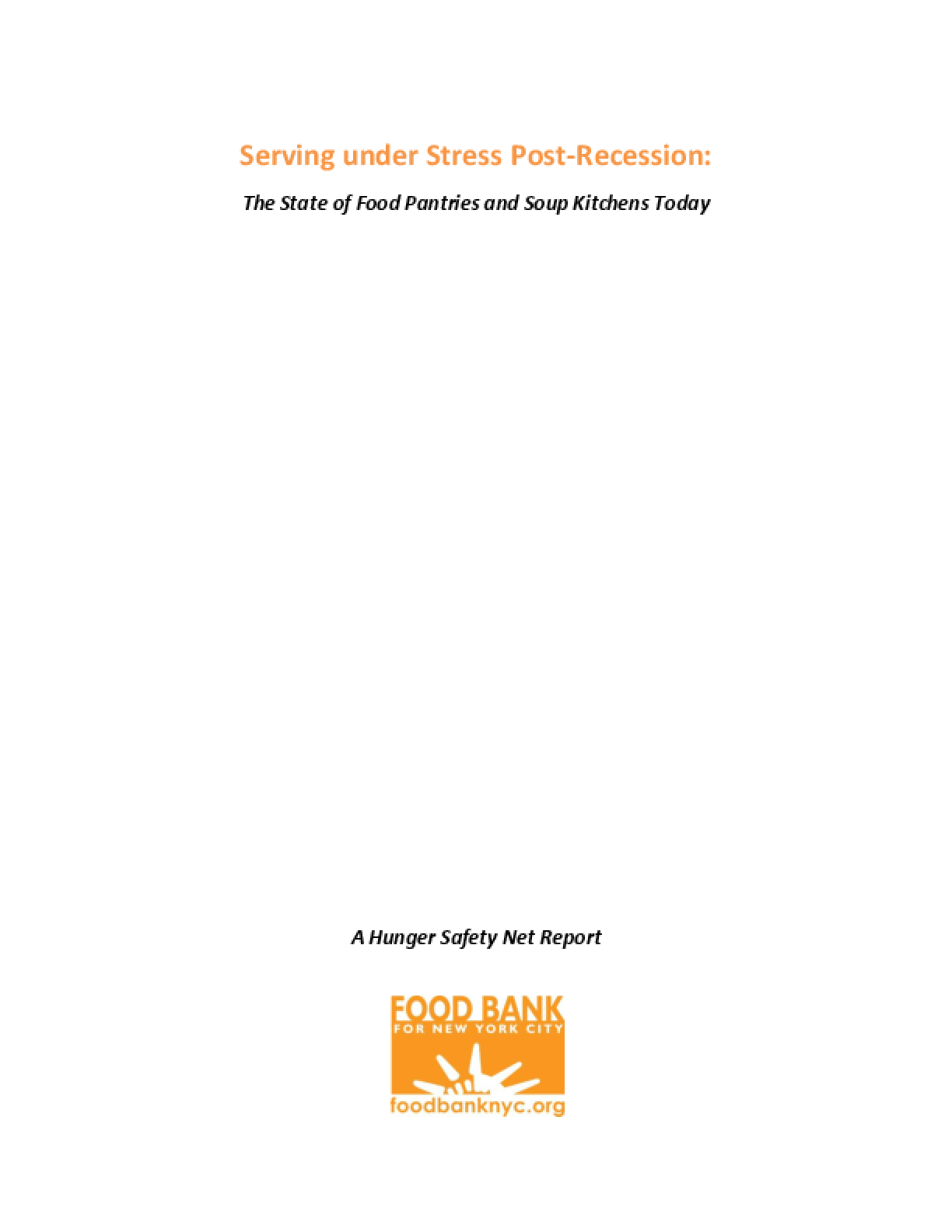