Locked Up But Not Forgotten: Opening Access to Family & Community in the Immigration Detention System

The Obama administration has committed itself to reforming the nation's expansive and controversial immigration detention system. In August of 2009, Department of Homeland Security (DHS) Secretary Janet Napolitano and Immigration and Customs Enforcement (ICE) Assistant Secretary John Morton announced that the agency would be taking steps towards the creation of a civil detention system tailored to the agency's asserted needs and purposes, a plan that will likely take years to come into fruition. Details about what the system might look like have emerged in recent news stories, with the agency signaling that it is looking into converting hotels and nursing homes into immigration detention centers. As it works toward implementing its long-term plan, the administration must not lose sight of what it can do immediately for the people currently trapped in a system that is a complete failure and that does not consider the individual in each case and ask whether detention is necessary at all.

This report examines access to family and community, a part of the day-to-day immigration detention experience that is severely restricted in the current system yet can be improved immediately. For the thousands of people that ICE holds in jails and detention centers across the country -- many of whom pose no flight risk or danger to the community -- detention amounts to near total isolation from the outside world, often for prolonged periods of time. In a system where fighting against wrongful detention and deportation can take months and sometimes years, severing people from their homes and restricting access to family and community through unreasonable and inhumane rules contradicts the notion that the immigration detention system is civil or administrative in nature. In effect, immigration detention is punishment-- not just for the immigrants in detention, but for their families and communities as well.

Facts for this report were gathered through visits to county jails and the Elizabeth Detention Facility in New Jersey, and dozens of interviews with current and former detainees, families of detainees, church members, advocates, and community groups that strive to provide detainees with companionship at the New Jersey facilities. Our fieldwork demonstrates that in the current immigration detention system, detainees fortunate enough to have access to family and community rely on family and community visitors to fill critical gaps in the system and provide them with much needed moral support and advocacy. Detainees who have no one on the outside on whom they can rely, on the other hand, easily lose hope of staying in the country -- regardless of the strength of their claims to remain in the U.S. 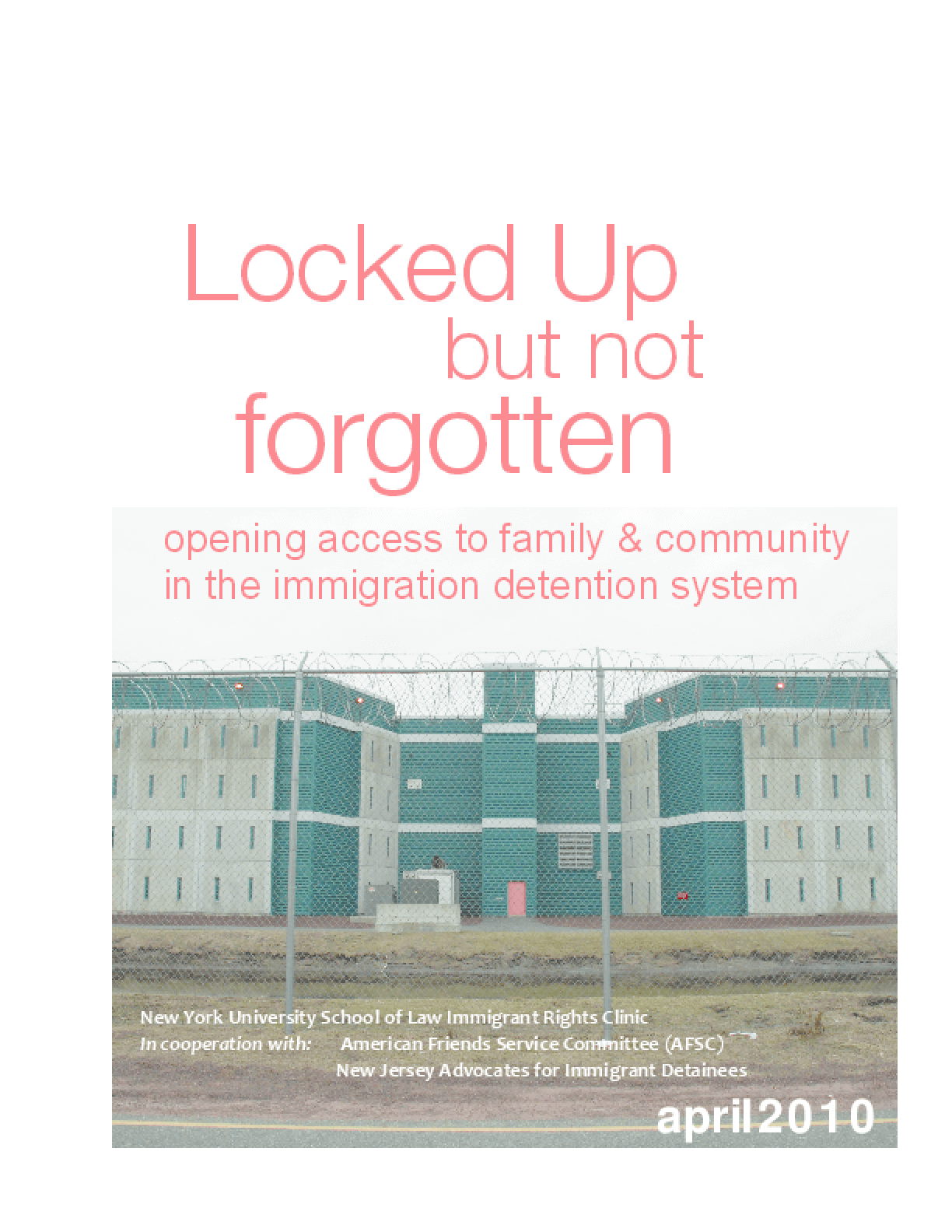