Down on the Farm: NAFTA's Seven-Years War on Farmers and Ranchers in the U.S., Canada and Mexico

In the summer of 2001, family farmers and ranchers throughout North America are struggling. During the 1993 debate over the fate of the North American Free Trade Agreement (NAFTA), U.S. farmers and ranchers were promised that NAFTA would provide access to new export markets and thus would finally bring a lasting solution to farmers' off-and-on struggles for economic success.Now, seven years later, the evidence shows farm income has declined, consumer prices have risen and some giant agribusinesses have reaped huge profits. These outcomes are defining the growing national debates over President Bush's proposals to establish Fast Track trade authority and to expand NAFTA through the Free Trade Area of the Americas (FTAA).This report reveals the basis for farmers' concern about NAFTA and its model of export-oriented agriculture. For the past seven years, Midwestern and Plains states wheat farmers; ranchers in Montana, Texas and other states; vegetable, flower and fruit growers in California; lumber mill owners in Louisiana, Arkansas and Washington; vegetable growers in Florida; chicken farmers nationwide and others have suffered declining commodity prices and farm income while a flood of NAFTA imports outpaced U.S. exports to Canada and Mexico. Yet it was not farmers in Mexico or Canada who benefitted from U.S. farmers' woes. Millions of campesinos throughout Mexico have lost a significant source of income and left their small corn farms. Some became farm laborers working in squalid conditions for poverty wages on large plantations growing produce for export to the U.S. Others moved to Mexico's cities where unemployment is high. Canadian grain and dairy farmers also face steeply rising debt during the NAFTA era. This report also documents the rise in Mexican staple food prices, such as in tortilla prices, even as the price paid to Mexican corn farmers dropped 48%. However, NAFTA has brought seven years of good fortune to many of the agribusinesses that pressured Washington, Ottawa and Mexico City to negotiate and ratify NAFTA's corporate- managed trade terms. Since NAFTA stripped away many safeguards for the folks who produce raw agricultural products, relative power and leverage has grown for large agribusiness conglomerates to exert pressure on both farmers and consumers. In Washington D.C., the Bush Administration is pushing forward with an ambitious plan to expand the NAFTA model throughout the hemisphere through FTAA. President George W. Bush and his principal trade policy advisors have stated that they intend to make the debate about NAFTA expansion and Fast Track (which they want to rename "Presidential Trade Promotion Authority") a referendum on NAFTA. Public Citizen agrees that the debate over NAFTA expansion ­ indeed, the national conversation about the premises and direction of U.S. trade policy ­ should be decided on the basis of the real-life results of NAFTA and the model on which it is based. In this report, we show how independent farmers in the U.S., Mexico and Canada have seen agricultural prices plummet, farm incomes collapse and critical domestic agriculture safety net programs dismantled. International free trade agreements and the domestic policies which furthered implementation of the export-oriented model, such as the U.S. "Freedom to Farm Act," have proved to benefit only the largest agribusinesses while the majority of farmers and consumers have lost. 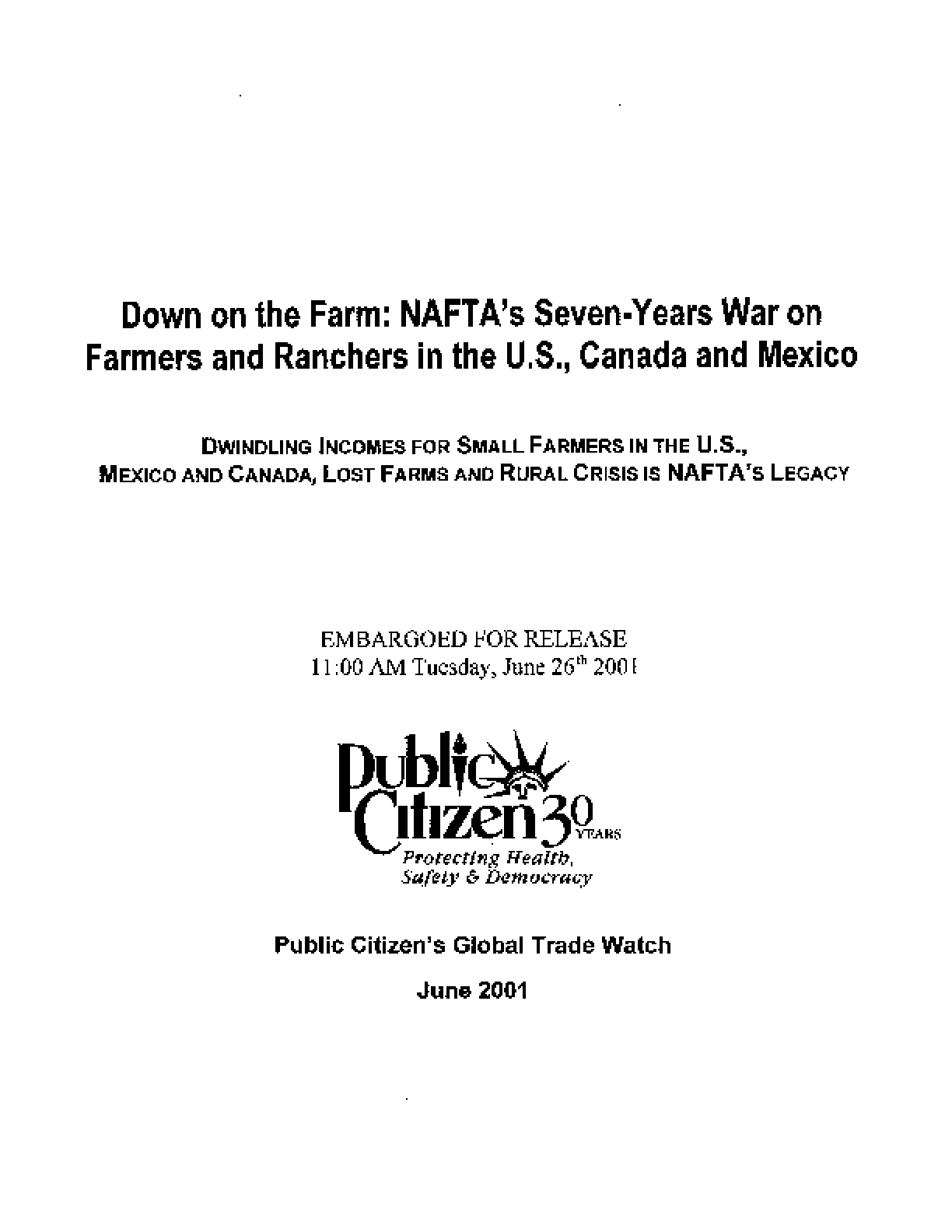