Down on the Farm: NAFTA's Seven-Years War on Farmers and Ranchers in Florida

In the summer of 2001, family farmers and ranchers throughout North America are struggling. During the 1993 debate over the fate of the North American Free Trade Agreement (NAFTA), Florida farmers and ranchers as well as farm communities across the U.S. were promised that NAFTA would provide access to new export markets and thus would finally bring a lasting solution to farmers off-and-on struggles for economic success. Now, seven years later, the evidence shows the income of independent Florida farmers has declined, consumer prices have risen while some giant agribusinesses have reaped huge profits. Florida has lost 1,000 small and medium sized farms since NAFTA went into effect. Total net income for "farm operations" in Florida increased between 1993 and 1999 but all of the income gain was in corporate farms. When corporate income increases are eliminated farm income drops steeply in Florida. During the seven years of NAFTA, net farm income for non-corporate Florida farm operations fell 74.4% between 1993 and 1999 from $51.4 million to $13.4 million. These bad outcomes for independent farmers are defining the growing national debates over President Bush s proposals to establish Fast Track trade authority and to expand NAFTA to 31 other Latin American and Caribbean nations through the Free Trade Area of the Americas (FTAA). This report documents the results that are causing farmers concern about NAFTA and its model of export-oriented agriculture. This special Florida supplement to a recent national report on NAFTA s agriculture-sector outcomes examines the impact of NAFTA on Florida farmers. For the past seven years, Florida vegetable growers, especially tomato and bell pepper growers, have been facing intense pressure from increasing imported vegetables from Mexico. Florida s citrus crop, the jewel of Florida s agriculture production, is already facing increased pressure from Mexico and will face even further import threats if President Bush is granted Fast Track trade authority. President Bush has announced he is seeking trade authority to negotiate FTAA NAFTA expansion which could result in Florida facing severe competition from powerhouse citrus producer Brazil. Farmers raising beef cattle in Florida who have seen incomes decline as farmgate prices for beef have collapsed in Florida under NAFTA would face new FTAA imports from beef giants Argentina and Brazil. Moreover, sugarcane farmers, who received special protection from Mexican sugar imports when NAFTA was negotiated, face even greater threats from FTAA nation Brazil which dominates the world sugar trade. Brazil has announced that access tothe U.S. for its citrus, beef, and sugar is a non-negotiable requirement for any FTAA deal. The complete executive summary and access to the full report are available via the link below. 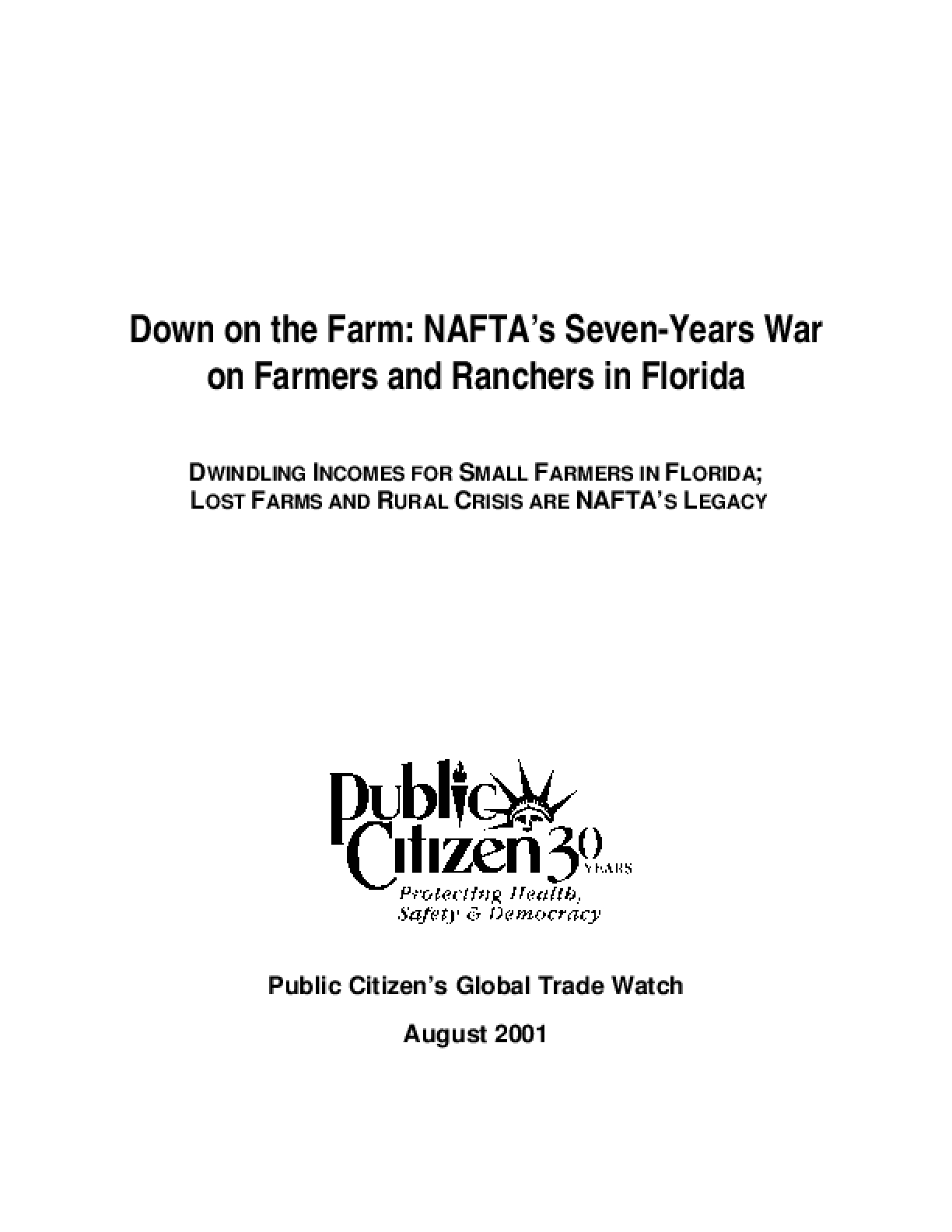