New research using federal government data shows that substantial numbers of Illinoisans work nonstandard schedules. Some 41 percent or about 2.5 million Illinois employees work either weekends or predominately non-daytime hours. The larger portion works weekends, but 19 percent or about 1.2 million employees work mostly non-daytime hours. In families with children under age 14, including single parent families and two-parent families with both parents employed, 42 percent work nonstandard hours. While nonstandard work schedules are found in some higher income occupations in Illinois such as nurses and doctors, they are more commonly concentrated in occupations that pay below the typical Illinois income, such as retail sales and building cleaning occupations. The trend, moreover, is probably upward: In the ten occupations with the largest projected job growth, 48 percent of employees work nonstandard schedules. Among the substantial challenges nonstandard work schedules present to Illinois working parents, one is finding suitable child care. According to state data, relatively few center-based and licensed home child care programs in Illinois offer care during evening, night or weekend hours. Many working parents, then, must respond to the mismatch between child care and nonstandard work schedules in one of two ways. They might stagger their work schedules so that one parent is always free for child care. This is obviously an option only for families with two parents. Other parents must find another relative, friend or neighbor to provide informal child care. (In this case parents must still coordinate their child care and work schedules with that informal provider.) Working nonstandard schedules, then, tends to force working parents to use either staggered parental care or informal family, friend or neighbor care. Lower earnings in jobs with nonstandard work schedules and the high cost of child care programs also tend to push parents toward staggering their work schedules or using informal child care. According to Illinois data, center-based and licensed home child care for one infant averages a prohibitive 15 percent of the typical family income (25 percent for an infant and a three-year old). Since family, friend and neighbor child care tends to be substantially cheaper than center and licensed home programs, working parents are likely to favor such informal care for reasons of cost as well as schedule. Data show that in fact a majority of children in Illinois do receive informal care from relatives, friends and neighbors rather than licensed or center-based care. Many children probably receive staggered parental care, although we do not have good data on this practice. Findings of the new research are consistent with the view that Illinois parents with fewer employment opportunities must accept nonstandard work schedules offered to them. For example, Illinois parents with lower than average earnings are more likely to work nonstandard schedules. 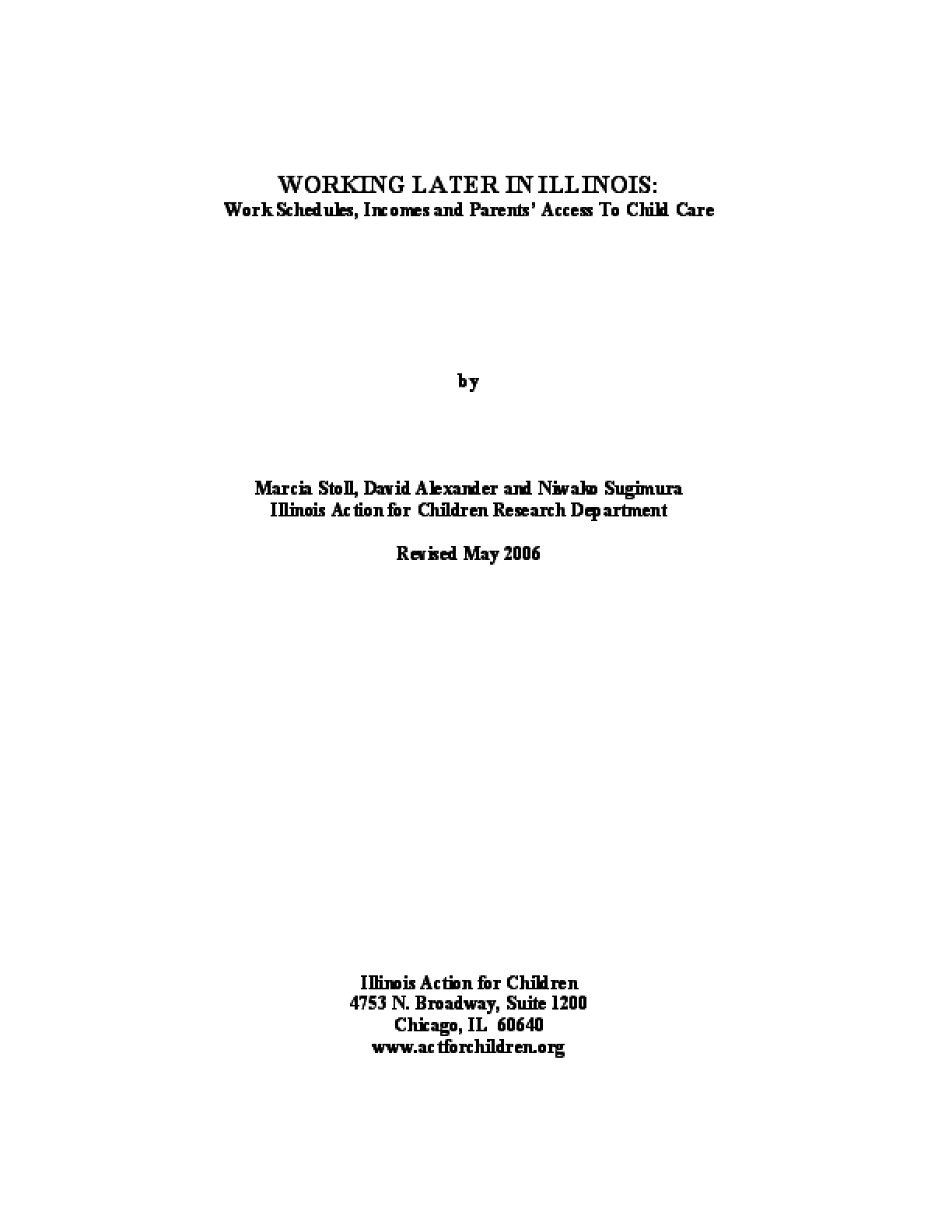