Homes, Not Handcuffs: The Criminalization of Homelessness in U.S. Cities

The housing and homelessness crisis in the United States has worsened over the past two years, particularly due to the current economic and foreclosure crises. On March 27, 2008, CBS News reported that 38 percent of foreclosures involved rental properties, affecting at least 168,000 households.1 The Sarasota, Florida, Herald Tribune noted that, by some estimates, more than 311,000 tenants nationwide have been evicted from homes this year after lenders took over the properties.2 People being evicted from foreclosed properties and the economic crisis in general have contributed to the growing homelesspopulation.

As more people fall into homelessness, local service providers are seeing an increase in the demand for services. In Denver, nearly 30% of the homeless population is newly homeless. The Denver Rescue Mission has reported a 10% increase in its services. The State of Massachusetts reports that the number of families living in shelters has risen by 33% in the past year. In Atlanta, Georgia, the Metro Atlanta Task Force for the Homeless reports that 30% of all people coming into the Day Services Center daily are newly homeless. In Concord, New Hampshire, the food pantry at First Congregational Church serves about 4,000 meals to over 800 people each month, around double the rate from 2007.

Of the 25 cities surveyed by the US Conference of Mayors for its annual Hunger and Homelessness Report, 19 reported an increase in homelessness in 2008.8 On average, cities reported a 12 percent increase. The lack of available shelter space leaves many homeless persons with no choice but to struggle to survive on the streets of our cities.

Even though most cities do not provide enough affordable housing, shelter space, and food to meet the need, many cities use the criminal justice system to punish people living on the street for doing things that they need to do to survive. Such measures often prohibit activities such as sleeping/camping, eating, sitting, and/or begging in public spaces and include criminal penalties for violation of these laws. Some cities have even enacted food sharing restrictions that punish groups and individuals for serving homeless people. Many of these measures appear to have the purpose of moving homeless people out of sight, or even out of a given city.

As criminalization measures can be counterproductive in many ways, the U.S. Congress recently passed and the President signed legislation, the Helping Families Save Their Homes Act of 2009, which requires the federal Interagency Council on Homelessness to devise constructive alternatives to criminalization measures that can be used by cities around the country.

Homes Not Handcuffs is the National Law Center on Homelessness & Poverty's (NLCHP) ninth report on the criminalization of homelessness and the National Coalition for the Homeless' (NCH) fifth report on the topic. The report documents cities with the worst record related to criminalizing homelessness, as well as initiatives in some cities that constitute more constructive approaches to street homelessness. The report includes the results of research regarding laws and practices in 273 cities around the country; as well as descriptions of lawsuits from various jurisdictions in which those measures have been challenged. 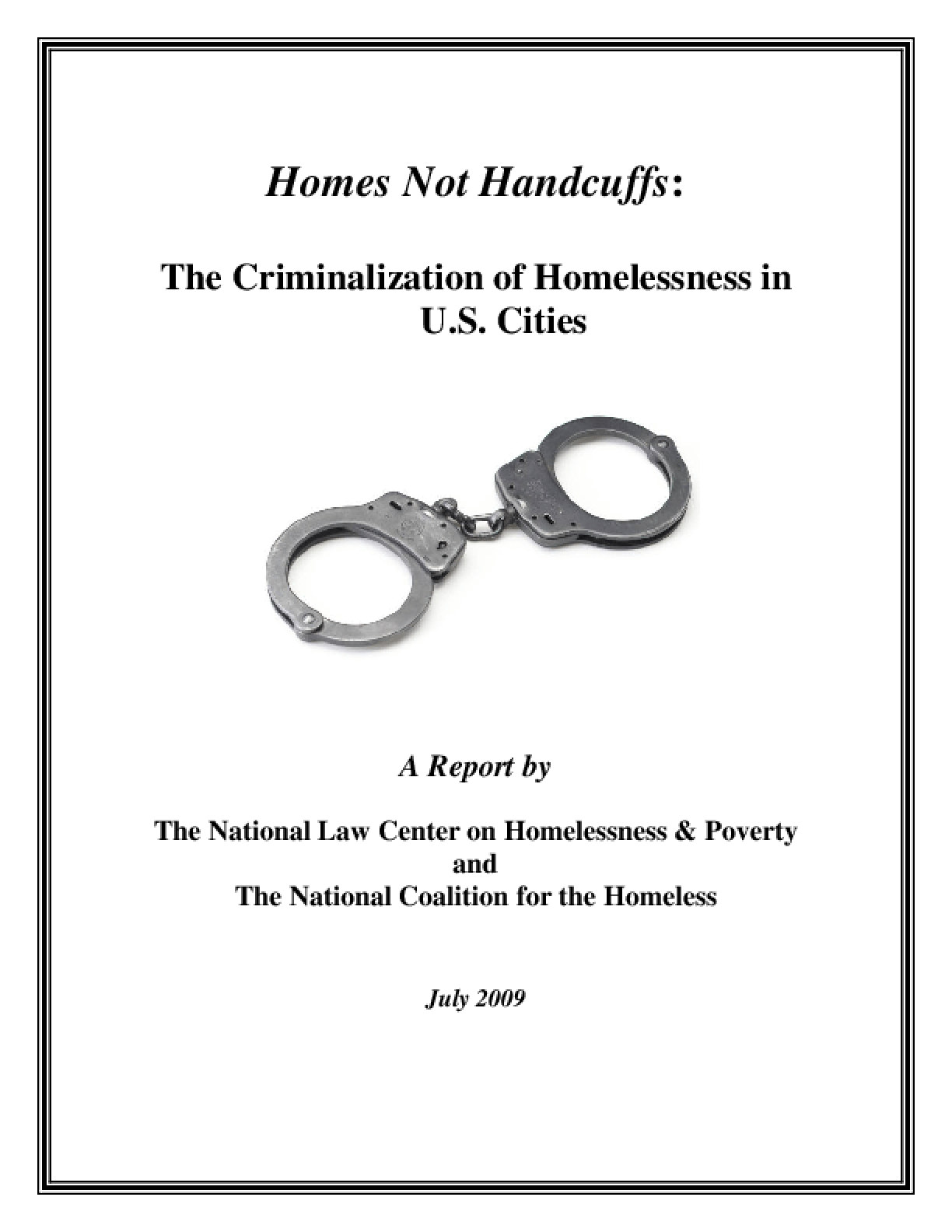